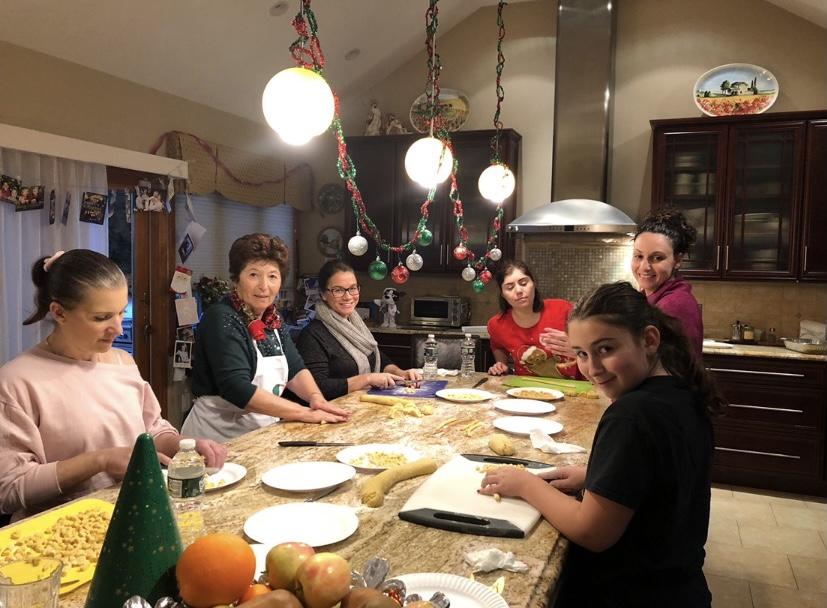 I am a first generation Italian-American, and my heritage is very important to me. My Nonna, on my mother’s side, came to America when she was just twenty four years old. Her husband was in Venezuela, so she was all alone except for her two children. A son who was seven and a daughter who was four. She was also pregnant with her third child. It was ten long days of rough waters and seasickness. When she did reach America it was very hard for her. She was too old to go to school and she could not find a job. Eventually, she found a sweatshop that hired her. They did not pay well, but most of her coworkers spoke Italian so it was easier for her to communicate. Finally, it is time for her to give birth to her third and final child. It was November 24, 1963 and it was 2 days after President John F. Kennedy’s assasination. So the day after my Nonna gave birth to her child was the funeral, but she did not know this and she was very confused when everyone was talking about it. My Nonna did the best she could to make everything as easy as possible for her and her family.

My family has a lot of traditions that have been passed down for generations. For example, for Christmas we make fried dough balls with honey and sprinkles on top. They are called struffoli. My Nonna has been doing it the longest so of course she is the boss. All of the women will come together and spend about 2 hours making these delicious treats. The men don’t like to make them, they only like to eat them. Another example is pasta a mano, or homemade pasta. My Nonna has taught everyone how to make it, and it is way better than store bought. We also have some Italian nursery rhymes that we always sing to the kids. I love to sing them to my niece and nephew, even though sometimes I don’t know what I’m saying. We also make fresh homemade tomato sauce every September. We make 300 jars of sauce for 6 different families. Last but not least, my favorite tradition is the tarantella. The town from where my mother is from is very small so they use the tarantella from the town next to them, Montemarano. La Tarantella Montemaranese is 15 minutes long. Every party that we go to my Great Uncle Salvatore brings a CD of the tarantella so he can give it to the DJ and we can dance the night away. We rarely ever do the full 15 minutes because most of the people dancing are older and don’t have enough stamina. My family and I still keep these traditions going no matter what.

As I have talked about her through this essay you have most likely come to notice that my greatest influence is my Nonna Anita. My Nonna is the one that has shown me every possible tradition and detail about my heritage there is to know. She taught me to be proud of my Italian roots and to showcase it. My Nonna Anita has made me realize how great it is to be Italian. It was October 2018 and I was getting ready for my Christmas concert. This year was especially exciting because the concert would be at Jazz at Lincoln Center in Columbus Circle, New York City. It was only a little more than a month away so it was time for me to pick a song. My mother really wanted me to do one song in English and one in Italian, but I didn’t want to do that. Even though I didn’t want to sing an Italian song my mother still made me. My Nonna Anita was very proud that I was going to sing in Italian so she helped us pick the song. She also helped me pick the American song which was The Little Drummer Boy, because that song is very important to my family and my ancestors. Eventually, we choose the Christmas song Gésu Bambino. At first I was frustrated that my family was making me sing this song, but once it was time to actually perform I was excited. I am not sure if you have ever been to Jazz at Lincoln Center but where I was performing the background of the stage was glass, so you could see all on Columbus Circle. It was so beautiful, and it just so happened that it started snowing. Before my performance I was so nervous, but when I got onto that stage and sang Gésu Bambino I did not care about all the people watching, I just wanted to make my family proud. It was as if I had my own personal spotlight shining just on my family, no one else mattered. I just looked at them and smiled. Afterwards everyone congratulated me and said I did a great job, but the best part was when my Nonna came up to me and gave me the greatest, biggest hug ever imaginable. When I realized how that song made my family feel I knew that singing an Italian song isn’t frustrating, it’s home.

This picture is from December 2019. Here we are making struffoli for Christmas Eve. In the front to the right is me, then behind me is my sister Maria, next to her is my sister Daniela, then my cousin Deana, then my Nonna Anita, and lastly my mother’s cousin Maria.

This picture is from September 2020. In this picture we are sorting out the good tomatoes from the bad tomatoes. In the front is me, then behind me are some family friends that like to make the sauce with us.

This picture is from May 1965. This is from right after my mother was born. To the right is my Nonna Anita holding my mother, then the little girl in the front is my Zia Luisa, then next to her is my Great Nonna Teresa, and all the way in the back is my Zio Mimmo.

This picture is from December 2018. This is me performing at Jazz at Lincoln Center when I sang Gésu Bambino. Next to me playing the piano is my piano and singing teacher Mr. John Senakwami.

ITALIAN LANGUAGE FOUNDATION EXPANDS ITS INTERNSHIP PROGRAM WITH PARTNERSHIPS WITH ITALIAN COMPANIES WITH OFFICES IN THE U.S.